Better than anti-depressants! … Sort of.

If they’re not trying to kill me, they’re trying to impregnate rabid monkeys I think.

The building smells like spray paint. Or paint thinner or something of the likes and I am not only having a worser migraine now but also I might be a teensy bit high.

Back to my highness… I think, somehow that already makes me a bad mom. My kid’s going to come out with a third arm or an extra pinky finger growing off it’s forehead like a unicorn or something. Why? All because I got all floaty at work from the fumes!! It’s totally cool though because I always wanted a unicorn.

Funny story about that. I always asked for a pony instead, even though what I really wanted was a unicorn. I just thought they would be a tad too expensive for my parents to afford, ponies are much more reasonable.

I figured if nothing else, I could just glue a Bugle on it’s head and call it a unicorn. You know? That’s what NPH would do.

He’s a problem solver like me.  But these days I don’t think he’d do anything except for try to smoke or sex that Bugle… Don’t get me wrong, I love NPH but … he’s a little less sane than he used to be. Something about all the pressure of being a doctor at such a young age… I don’t really know because when I was 16, I was hardly saving people’s lives. 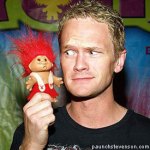 I digress. as usual. see how this euphoria is causing an out-of-character-like ADD?

So… How nice of me, I was willing to compromise. And you know what?  No unicorn, no pony. Which, is apparently a direct. Or indirect cause for my failing at motherhood. Already. But on the bright side of things, I’m totally going to get that Unicorn for real.

Also, I read somewhere that this is how they impregnate rabid monkeys! Yeah they fill the room with smoke/fumes/rohypnol/spray paint/paint thinner whatever they can find really and knock ’em out. What happens there is a case for Animal Investigators because I think maybe they’re not supposed to do that. The knocking out part or the raping. Just my guess though. Who knows, maybe it’s ok since they have rabies…??? Weird. I need some water…

﻿Here’s my unicorn. Love him. or her. I can’t see it’s business to tell you.

I Used to Be Funnier…

Promote Your Page Too